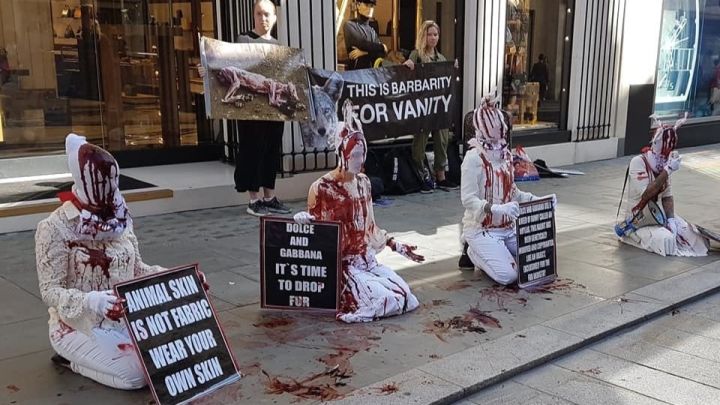 On 20th September 2019, activists protested outside a Dolce & Gabbana store in London against the company’s use of fur that comes from a breed of bunny called Orylag. This species of bunny has been genetically engineered specifically to be killed for the fashion industry for their soft, dense fur.

There is undercover footage showing the horrific conditions these animals are kept in – they are put in tiny, grimy cages on wire flooring designed to incapacitate. Dead and injured animals are a regular sighting as there is little care for these animals on-site.  The Young Greens would like to express their support for these protesters and their opposition to Dolce & Gabbana and other such companies that think their unnecessary, cruel practices are acceptable.

The horrific abuse and subsequent slaughter of genetically engineered rabbits for the sake of luxury clothing is barbaric and archaic. These protesters ought to be praised and supported. Instead they find themselves awaiting a court hearing on 21-22 September 2020 with bad prospects.

With an expert legal team over at Dolce & Gabbana and some farcical charges put forward, the protesters may very well be found guilty, which would be a gross injustice,  on a societal level as well as for each of the protesters. The situation is stark – grassroots activists are likely to be punished for their entirely lawful, peaceful protest rather than the behemoth Dolce & Gabbana, which is using its resources to silence protesters and keep its unacceptable practices under wraps for the sake of corporate greed.

The Young Greens put forward their unequivocal support for the protesters in their fight against Dolce & Gabbana and animal cruelty. We also call on people to donate towards the legal fees these innocent protesters desperately need to fight off this corporate bully. It is imperative that these protesters receive the legal representation they require to prove their innocence, eradicate a criminal practice, and clean up the fashion industry.